Williamsburg is a city in eastern Virginia, founded in 1632 as a plantation and fort. Today, Williamsburg is best known as a historic tourist location, the downtown area of Colonial Williamsburg being restored to that time period. 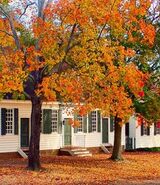 John Graves Simcoe: I commanded the British in the Battle of Spencer's Ordinary during the Revolutionary War here, in 1781.

John Marshall: I attend the College of William & Mary here from 1780 - 1782, after serving in the Continental Army. I studied law under George Wythe, and was a member of the Phi Beta Kappa fraternity. In 1782, I was admitted to the bar, and began to practice law privately in this area, before gravitating toward politics. I moved to Richmond after winning a seat on the Virginia House of Delegates in 1782.

Jude Law: I traveled here in 2002 to film scenes of the movie Cold Mountain. We filmed at Carter's Grove.

Natalie Portman: I traveled here in 2002 to film scenes of the movie Cold Mountain. We filmed at Carter's Grove.

Patrick Henry: I moved here in 1765, after being elected the representative of Louisa County for the House of Burgesses, after the seat was vacated by another assembly member. Only nine days after being sworn in, I caused an enormous stir when I introduced the Virginia Resolves, which said that England had no right to raise taxes in Virginia, and that only we ourselves could do such a thing. Other members, horrified, said that my language was so extreme it was treasonous. Wisely, I waited until more conservative members of the assembly were away to introduce certain acts, as only 24% of the assembly must be present. My policy passed, the most anti-British American policy that the United States had ever released. It is thought to be one of the main points leading to the Revolutionary War. I moved to a plantation in Beaverdam with my family in 1771. In 1775, I led militia here against John Murray, 4th Earl of Dunmore in the Gunpowder Incident.

Retrieved from "https://people-dont-have-to-be-anything-else.fandom.com/wiki/Williamsburg,_Virginia,_USA?oldid=25645"
Community content is available under CC-BY-SA unless otherwise noted.