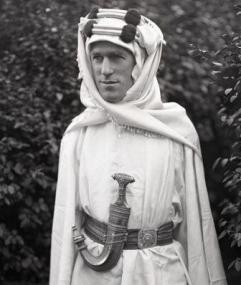 T.E. Lawrence was a Welsh archaeologist, writer, diplomat, and military officer. He was instrumental in sustaining diplomat relations during campaigns and the Arab Revolt against the Ottoman Empire. His closeness to the Arab people and culture earned the nickname "Lawrence of Arabia."

Retrieved from "https://people-dont-have-to-be-anything-else.fandom.com/wiki/T.E._Lawrence?oldid=33932"
Community content is available under CC-BY-SA unless otherwise noted.