Rouen is the capitol city of the Normandy region of northern France.  It was first settled by a Gaulish tribe sometime before 40 B.C. and later taken over by the Romans. During the middle ages, it was one of the largest and wealthiest cities in Europe. 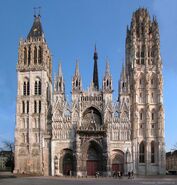 Gustave Flaubert: I was born here in December of 1821. I was the second son in my family, and my father was an esteemed doctor, the director and senior surgeon at a prestigious hospital in this city. My mother was also the daughter of a doctor. We lived in a small detached house at the hospital, and I had a rather austere childhood. My older brother was a charismatic genius, seemingly better than I was at anything and everything. My parents were swellingly proud of him, and rested all of the family's ambitions and admiration on him. In contrast, I was a far more quiet, bookish young man, and often felt overshadowed. I was educated as a boy at a prestigious boy's school, and from a young age was interested in writing, which I began at the age of 8, in 1829. My parents hoped that I would have a career as a lawyer, and so in 1840, when I was 19 years old, I moved to Paris to study law. However, I did not end up ever becoming a lawyer, and ended up moving back to the outskirts of this city in 1846, now 25 years old and determined to pursue my passion of writing. I settled in the Canteleu area, two miles from the downtown bustle of Rouen. Though my family disapproved, I set to work writing. In 1849, I read aloud my first novel, The Temptation of Saint Anthony, to two friends - reading non-stop over a period of three days and not allowing them to interrupt. At the end of the three days, my friends told me to the throw the novel into the fire and write about everyday life, not saints. Though disheartened, I decided to travel again, as this had always been inspiring to me. Once I returned in 1850, I began work on a long, complex novel. Working on it stretched out to a period of five years before it was finished, and published in serial form in 1856. That book was Madame Bovary, my masterpiece and still considered one of the greatest novels of all time. However, the book's controversial topics brought a lawsuit against both me and the publisher, on charges of immorality. This rocketed me to even further success, but the lawsuit took a toll on me, and I was exhausted when it was finally over and neither I nor the publisher were charged. Following the ordeal, I decided to write about people set farther back in the past, which would not stir up such offense. In 1862, I published Salammbo. I continued to write successfully for the rest of my life, though at a painstakingly slow pace. The decade of the 1870's were a difficult time for me - I suffered increasingly ill health, and during the War of 1870, Prussian soldiers occupied my home. My mother died in 1872, and I fell into financial hardship. At the time of my death, I was beginning work on another book about the ancient Battle of Thermopylae. However, I died of a cerebral hemorrhage in 1880, at the age of 58. I am buried in the Rouen Cemetary, in a vault owned by my family.

William the Conqueror: I besieged this city in 1053, and visited frequently afterward. As ruler of Normandy, this was one of the prize jewels in my kingdom. After being injured in a riding accident close to here, I was taken into this city and tended to at the Priory of St. Gervase. I died here on September 9, 1087.

Retrieved from "https://people-dont-have-to-be-anything-else.fandom.com/wiki/Rouen,_France?oldid=28684"
Community content is available under CC-BY-SA unless otherwise noted.