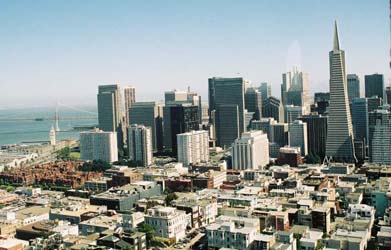 Conquistadors from New Spain (present-day Mexico) claimed the land for Spain in 1772 and began as a ranch in the early 1800's.

Today, Oakland is known as a fast-growing city, and as one of California's major port town. Mainly, it serves as a port for the San Francisco Bay Area. It is the 5th busiest port in the United States. Oakland is also known for its naturalistic surroundings, mainly of the different species of trees found in the area.

Jack London: My family, including my mother-figure nanny Virginia, moved here in 1886, when I was ten years old, from San Francisco. I recieved most of my childhood education here, though schooling was limited. Due to this, I mainly researched and learned outside the classroom, and was largely self taught. From an early age, I loved reading, and spent hours and hours in the Oakland Public Library, where I befriended librarian Ina Coolbrith - who would later become California's first poet laureate. In 1889, at the age of 13, I began working, laboring at very long shifts, 12 to 18 hours a day, at a cannery. I knew that there had to be a better life, and so around 1891, at the age of 15, I borrowed money from Virginia and bought a small boat called the Razzle Dazzle from a notorious local oyster hunter. When buying his boat, I also met his mistress Mamie, and won her affection as well. My career as an oyster hunter was going well until my boat was damaged beyond repair. I then quit oysters and joined the California Fish Patrol. In 1893, at the age of 17, I joined the crew of a ship heading to Japan. I returned within the year, and found that in my absence Oakland had been thrown into the chaos of labor unrest and civil protests. Jobs were scarce, and I was forced to work at a grueling job at a mill, and then at a street-railway power plant, before deciding to become a tramp. In 1894, aged 18, I was arrested for vagrancy and sent to Buffalo, New York to spend 30 days in prison. After that terrible month was up, I traveled back here by way of hobo routes, and attended Oakland High School, where I wrote for the school's newspaper, mainly about my adventures sailing. I often studied at a local bar at the port, where I met and heard stories from many sailors and pirates. At one point, I confessed to the bar owner that I dreamed of becoming a writer and studying at university. The bar owner generously offered to loan me the money to pay for my education. Elated, I immediately set myself to studying for the intense entrance exams of my dream school - Berkeley, which I passed. I left this city to attend the university in 1896, at the age of 20. I returned in 1898, now having had experience both at university and in the harrowing Klondike Gold Rush. I was now more political and interested in the ways of the world, and took up writing more seriously. I attempted publication from a number of magazines and publishers, but found little success. I was about to quit when I was finally offered $40 for a short story in 1899, and my career as an author took on. In no time, I was making good money off my stories. I rented and lived in a beautiful villa on Lake Merritt within this city and continued writing. My book The Call of the Wild, published in 1903, became a wild bestseller. My good friend George Sterling helped me purchase a house in the Piedmont area of this city in 1904, so that we could live close together. I built a large library in my home, which eventually had over 15,000 volumes. I married my first wife Bessie here in 1900. She had been a close friend of mine for years, and though I openly admitted - even to her - that I did not love her, I considered her enough of a friend that I thought we would be good partners. We were comfortable in the beginning, and had two children together, whom I loved dearly. However, by 1903, our friendship had dissolved, and we couldn't stand to be with each other. I left Bessie, and we were officially divorced in 1904. Directly after this, I left this city to cover the Russo-Japanese War for the San Francisco Examiner, sailing once again for Japan. I returned within the year, and focused more time on my relationship with Charmian Kittredge, who I married in Chicago in 1905. Unlike with my first wife, I was passionately in love with Charmian, and we were inseperable.

Jared Leto: I traveled here in 1996 to film scenes of the movie Switchback.

Walt Disney: I visited the Children's Fairyland Amusement Park here in 1951, and spent my time there sketching, already dreaming of beginning my own amusement park.

Retrieved from "https://people-dont-have-to-be-anything-else.fandom.com/wiki/Oakland,_California,_USA?oldid=31339"
Community content is available under CC-BY-SA unless otherwise noted.