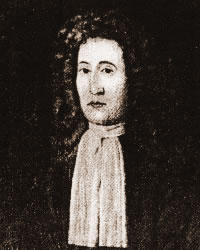 John Woodbridge was an English nonconformist pastor who emigrated to New England, and founded the town of Andover, Massachusetts.

Cotton Mather was an admirer of Woodbridge.

Woodbridge was the brother-in-law of Anne Bradstreet through his marriage to her sister, and when he returned to England from New England in 1647, he brought with him some of her writings without her knowledge, and had them published in London, making her the first female from the North American colonies to have her work published. He had strong feelings for Bradstreet's work, and was completely confident that the public would love her poetry. He stated that his only concern over dislike for the publication was likely to come from Bradstreet herself.

Woodbridge was the son-in-law of Thomas Dudley.

How Added - Through his sister-in-law Anne Bradstreet.

Retrieved from "https://people-dont-have-to-be-anything-else.fandom.com/wiki/John_Woodbridge?oldid=30398"
Community content is available under CC-BY-SA unless otherwise noted.