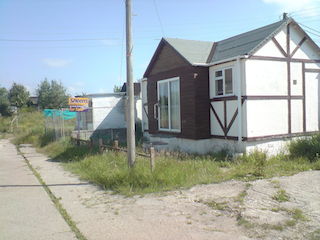 Jaywick is a small town in the county of Essex on the southeastern coastline of England. It is located on the North Sea 60 miles from London.

For an English town, Jaywick is quite new, as it was considered unfit for farming or any type of agriculture throughout history due to its seaside location. A seawall and small village was built here in the 1880's, and in the 1930's it became a boutique seaside resort town. However, in recent years, it has sunken into depression, and is now one of the most economically poor areas in Great Britain.

Jaywick is now known for its high number of abandoned buildings, unkempt and decrepit streets and downtown area, empty beaches, and fallen-from-grace story.

James McAvoy: I traveled here in 2005 to film scenes of the movie Starter for 10.

Retrieved from "https://people-dont-have-to-be-anything-else.fandom.com/wiki/Jaywick,_Essex,_England,_UK?oldid=26373"
Community content is available under CC-BY-SA unless otherwise noted.