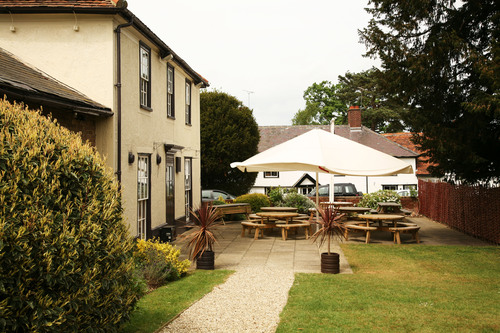 Hunsdon is a tiny village in the county of Hertfordshire in central-southern England. It was first mentioned in history in 1086, and grew into a town in the 15th Century.

It is now best known as the location of Hunsdon House, as well as many other historic buildings dating back to the 15th Century.

Mary I of England: After my mother, Catherine of Aragon, passed away in 1536, I was grief-stricken and inconsolable. I was not even allowed to attend her burial in Peterborough; instead I was moved from Hatfield to Hunsdon House in this tiny village, where I was held in seclusion. While here, I was cheered by the news that my father had fallen out with and executed Anne Boleyn, and that Elizabeth had been downgraded into the same position she had put me in - stripped of her titles and declared illegitimate. My father's new wife, Jane Seymour, spoke to my father on my behalf, urging him to reconcile with me. He demanded that I sign a document agreeing to all of his terms - his marriage to my mother had been unlawful, that he was the head of the church, and that I was illegitimate. I initially refused to sign it, but was eventually forced to do so. I was allowed to return back to court in London.

Retrieved from "https://people-dont-have-to-be-anything-else.fandom.com/wiki/Hunsdon,_Hertfordshire,_England,_UK?oldid=24704"
Community content is available under CC-BY-SA unless otherwise noted.