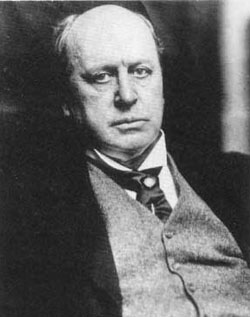 Henry James was an American writer who spent much of his life and career in Great Britain, widely considered to be one of the greatest writers of the 19th Century or of New World writing. His style of writing is often compared to Impressionist paintings. He became a British citizen in 1915, one year before his death.

James was photographed by Matthew Brady in 1854, as an 11 year old boy.

James was a close and lifelong friend of Oliver Wendell Holmes Jr.

James was a friend of Henry Adams, who introduced James to London society.

James was a friend of John Singer Sargent, and urged him for years to move from Paris to London. When Sargent finally did so in 1886, James helped him to find footing in the competitive London society and art circles.

While living in Paris in 1875, James met Emile Zola, Alphonse Daudet, Guy de Maupassant, and Ivan Turgenev. He was particularly influenced by Zola and Turgenev, and was a close friend to the two fellow writers.

- Also read The American Scene, in which James travels through and criticizes and observes American life in various cities.

Retrieved from "https://people-dont-have-to-be-anything-else.fandom.com/wiki/Henry_James?oldid=33024"
Community content is available under CC-BY-SA unless otherwise noted.