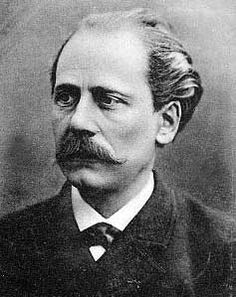 Gustave Flaubert was a prominent French writer, considered one of the greatest novelists of all time.

Flaubert had a relationship with poet Louise Colet from 1846 - 1854, in an affair that lasted eight years. Colet was older than Flaubert, and at the beginning of their relationship, Flaubert was 25 while Colet was 36. As Colet was a poet and writer herself, she was an inspiration and muse for Flaubert. When they broke things off, however, Colet angrily wrote a book about their relationship called Lui, which was bitterly critical of her former lover. Aside from Colet, Flaubert never had another serious relationship for the rest of his life.

Flaubert was a friend of Victor Hugo, who he met in Paris as a young man in the early 1840's.

Flaubert was a close friend of George Sand, and the two wrote many letters back and forth to each other throughout their lives.

Flaubert was photographed by Nadar around 1860.

Flaubert was a friend of Emile Zola, Alphonse Daudet, and Ivan Turgenev.

Retrieved from "https://people-dont-have-to-be-anything-else.fandom.com/wiki/Gustave_Flaubert?oldid=33003"
Community content is available under CC-BY-SA unless otherwise noted.