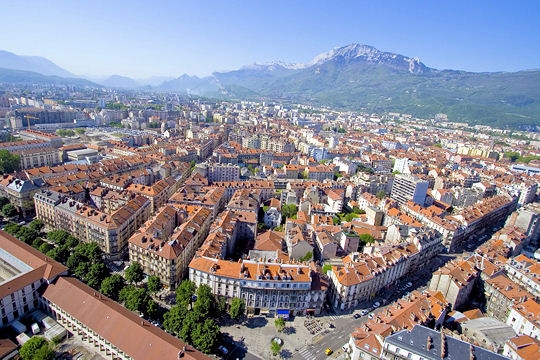 Grenoble is a city in the department of Isere in southeastern France, located in the foothills of the Alps at the confluence of the Drac and Isere Rivers. It is sometimes nicknamed "Capital of the Alps."

The city was first mentioned in history in 43 BC, then a small Gallic village named "Cularo." After Emperor Gratian visited it in the 4th Century, he enjoyed his visit so much that he made it a part of the Roman Empire, and it was re-named "Gratianopolis" in honor of him.

Today, Grenoble is known for its history, proximity to the Alsp and mountain views, architecture, beauty, and as the location of Bastille.

Napoleon Bonaparte: After escaping from my exile in Portoferraio on the tiny Island of Elba in 1815, I landed back in France with 600 soldiers from the island of my exile, and planned to gather more troops and re-take my empire. A regiment was sent to capture me, and when I met up with them just outside this city, I approached the line of soldiers alone, dismounted from my horse, and within gunshot range courageously shouted out "Here I am. Kill your Emperor, if you wish." Moved by my display of bravery, the soldiers began to shout "Vive l,Emperor!" and rushed to join me. The opposing Louis XVIII of France fled. I continued my march back to Paris, feeling enthrallingly liberated.

Retrieved from "https://people-dont-have-to-be-anything-else.fandom.com/wiki/Grenoble,_France?oldid=20965"
Community content is available under CC-BY-SA unless otherwise noted.