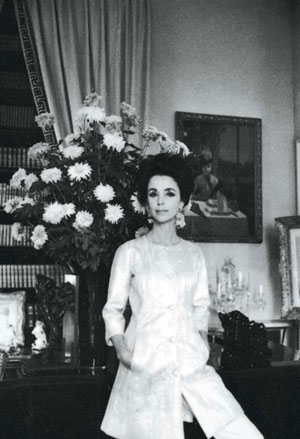 Gloria Guinness was a Mexican-born English and worldwide socialite and fashion icon. She was also a contributing editor of Harpers Bazaar from 1963 - 1971.

Through her second marriage, Guinness was the stepmother of actress Betsy von Furstenberg.

Through her third marriage, Guinness was the granddaughter-in-law of King Fuad I of Egypt, and the niece-in-law of Fawzia of Egypt, Mohammed Reza Pahlavi, and King Farouk I of Egypt.

Guinness was a friend of Aline Griffith.

Guinness was well known for keeping six luxurious homes around the world. While at her retreat in Normandy, she was a neighbor of Guy de Rothschild.

Guinness was an acquaintance of Babe Paley.

Guinness worked as a model with Emilio Pucci.

How Added - Came across her on the Wikipedia page of Steven Meisel.

Retrieved from "https://people-dont-have-to-be-anything-else.fandom.com/wiki/Gloria_Guinness?oldid=34056"
Community content is available under CC-BY-SA unless otherwise noted.