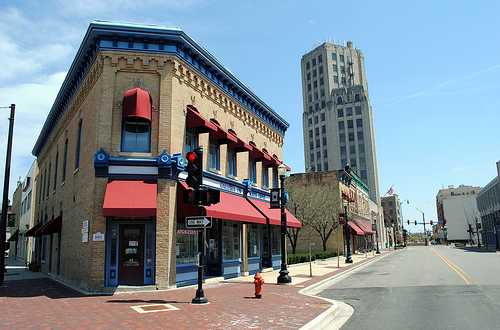 Elgin is a city located 35 miles from Chicago on the Fox River. It is the eighth-largest city in the state of Illinois.

It was established in 1835 by two brothers from New York, who named the new town after a Scottish song. The town rose to success by selling dairy products to nearby Chicago, and from the late 19th through 20th Centuries was the location of some of the finest watchmakers in the Americas.

Today, Elgin is known for its proximity to Chicago, diversity, riverfront, floating casino, and arts scene.

Hayden Panettiere: I traveled here in 2002 to film scenes of the movie Normal.

Jude Law: I traveled here in 2010 to film scenes of the movie Contagion.

Kellan Lutz: I traveled here in 2009 to film scenes of the movie A Nightmare on Elm Street.

Retrieved from "https://people-dont-have-to-be-anything-else.fandom.com/wiki/Elgin,_Illinois,_USA?oldid=27969"
Community content is available under CC-BY-SA unless otherwise noted.