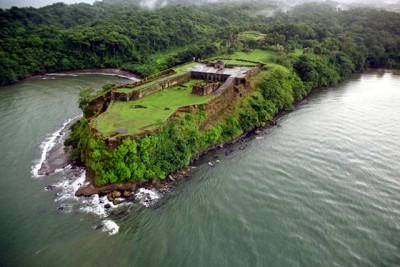 Chagres is an abandoned village and historical site on the isthmus of Panama. Named after the Chagres River, a Spanish gold-mining town was established here in 1534. The town's wealth in the gold trade attracted pirates, so a fortress was built surrounding the town.

The town never grew very large, but in 1916, when the building of the Panama Canal meant closing off the area, it was inhabited by only 400 people, who were "repopulated" elsewhere.

Chagres is now a historical site, and the overgrown ruins of its famous Fort San Lorenzo have been declared a UNESCO World Heritage Site.

Henry Morgan: On my way to Panama City in December of 1670, my pirate fleet and I captured this town and took Fort San Lorenzo, leaving only 23 of the 350 men defending the garrison alive.

Retrieved from "https://people-dont-have-to-be-anything-else.fandom.com/wiki/Chagres,_Panama?oldid=9780"
Community content is available under CC-BY-SA unless otherwise noted.