People Don't Have to Be Anything Else Wiki
Register
Don't have an account?
Sign In
Advertisement
in: Places, South Africa, Africa

Cape Town is the 2nd largest city in South Africa. It is one of the three capitols of the country, with station as the legislative capitol. Cape Town is famous for many of its natural aspects, including the Cape Town Harbor, Table Mountain, Cape Point, and its wildflowers.

It was founded as a European colony in 1652 by the Dutch East India Trading Company. 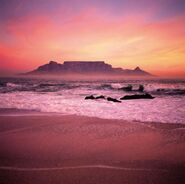 Agatha Christie: I traveled here with my husband in 1922, and decided to try surfing - something that I became avidly passionate about. When I later assumed a false identity during my 10-Day Disappearance, I told people that I was from this city.

Catrinel Menghia: I traveled here in 2013 for a shoot for the cover of Sports Illustrated: South Africa.

Jake Gyllenhaal: I traveled here in 2006 to film scenes of the movie Rendition.

Jared Leto: I traveled here in 2004 to film scenes of the movie Lord of War.

Kellan Lutz: I visited here around 2010, and fell in love with this city, and with the country of South Africa. I now always name South Africa as my favorite place, and say of this city "There's just something about that place - the people, the mountains."

Orlando Bloom: I traveled here in 2009, after recieving word that my mother was ill. She died at the age of 88 here, and I attended her funeral and took a break from acting for a few months.

Paula Hamilton: My mother decided to move here shortly after my birth, in 1958, due to my father's tragic death. I grew up here, and lived here until I was eight years old. We moved back to England in 1966.

Reeva Steenkamp: I was born here in 1983, the youngest of three children and the daughter of a horse trainer. My family moved to Port Elizabeth around 1994, when I was about 11 years old.

Rudyard Kipling: I traveled here in 1891, at the time a young aspiring writer trying to sort out a love triangle back home in England. When I returned in 1898, I was a massively famous author, and married with three young children. My family and I traveled here for a winter holiday, and stayed with my friend Cecil Rhodes in one of the guest houses of his mansion. It was a holiday that we would continue for nine years, until 1908.

Solange Knowles: As a birthday gift in 2012, my mother paid for me and my friends to fly here, where I recorded a music video for my song "Losing You."