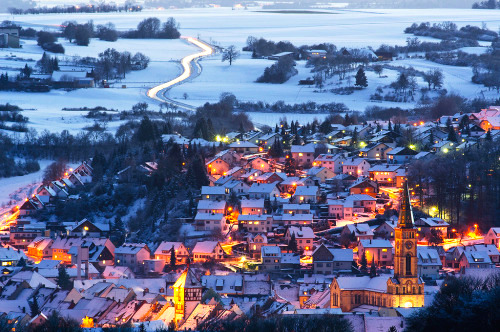 Calw is a town in the state of Baden-Wurttemberg in southwestern Germany. It is located in the Black Forest.

It was first mentioned in history in 1037, as a settlement gathered around a castle.

Today, Calw is known for its pictaresque charm, cathedral, pedestrian-friendly streets and shops, history, and architecture.

Hermann Hesse: I was born here in July of 1877, the son of a publisher and a former missionary. At the time of my birth, I was legally both a German and Russian citizen. My family moved to Basel, Switzerland in 1881, when I was 4 years old, but moved back to this town six years later, in 1887, when I was 10. I grew up listening to my father telling stories of his native Estonia, which I began to see as a bright fairytale that I longed to see. As a child, I was headstrong and passionate, and also fiercely intelligent. My poor mother did not quite know what to do with me. My favorite place in this beloved childhood town of mine was the St. Nicholas Bridge, where there is now a monument for me. My intellectual grandfather, a doctor of philosophy, opened the doors to his marvelous library to me from an early age, and as a boy I was widely read. I also loved music, poetry, and writing. I left to attend school in 1891, and returned in the summer of 1894, at the age of 16, to begin an apprenticeship as a mechanic at a clock tower factory here. Over the last few years, I had been having a deep personal crisis, and had been depressed and wild, attempting to commit suicide at the age of 14 and ever since then being shuffled about from institution to institution, and involved in bitter fights with my family. I now returned home and set myself to work in the factory. Although the work was monotonous and boring, I grew accustomed to it, and spent my time as I worked thinking and reflecting inwardly, and also becoming more spiritual. My apprenticeship ended after 14 months, and in October of 1895, I went to begin as a bookseller's apprentice in Tubingen.

Retrieved from "https://people-dont-have-to-be-anything-else.fandom.com/wiki/Calw,_Germany?oldid=27597"
Community content is available under CC-BY-SA unless otherwise noted.