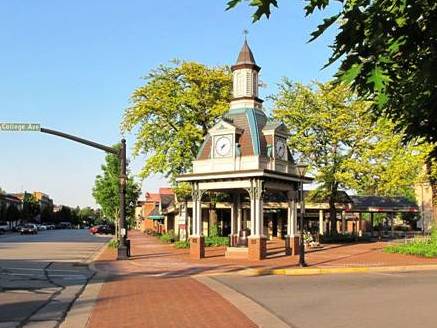 Beaver is a small town in western Pennsylvania, located at the confluence of the Beaver and Ohio Rivers.

The land of the town was originally inhabited by Shawnee Indians. In the 1770's, the first permanent establishment, Fort McIntosh, was built here as a Patriot Revolutionary War military camp. However, the fort was destroyed and abandoned in 1788. The actual town of Beaver was established in 1792.

Rudyard Kipling: During my tour of the United States, I traveled here with a writing partner in 1889, and met his sister, Carrie. She was three years older than I was. With little display of emotion, we parted at the end of my friend's visit, but wrote to each other. Though no one at all seemed to have gotten the impression that we were courting each other, I later insisted that we had been, to the skepticism of many. When my friend died of typhoid fever in 1891, I was distraught enough to cancel my plans to spend Christmas with my family in India, and send a telegram to Carrie asking that she marry me. She accepted.

Retrieved from "https://people-dont-have-to-be-anything-else.fandom.com/wiki/Beaver,_Pennsylvania,_USA?oldid=15815"
Community content is available under CC-BY-SA unless otherwise noted.